Everything You Need to Know About Financial Aid Letters

If school was free, I’d never stop going. I happily declare that. Unfortunately, the cost of an undergraduate education is on the rise and decoding the dollar signs and interest charges and worth has quickly become the biggest hurdle to attending.

It’s become a really painful process, and, as someone who’s come out on the other side (in debt but very educated), I want to make this easier on future students. So I’m going to give you the decoder ring for that Financial Aid Award letter you received with your acceptance. Congratulations, graduate. Let’s figure out how we’re going to do this, one dollar at a time.

The Follow-Along Portion of Today’s Program

I’m a firm believer in examples. Throwing a bunch of numbers everywhere is just messy, and it can be so confusing. Here’s an example of what a Financial Aid Award Letter looks like for Cappex University.

Alas, not a real university, as cool as that would be. For right now, though, let’s pretend that you’re seriously considering attending CappU and you need to figure out if you can afford to foot the bill.

This is a sample financial aid award letter. 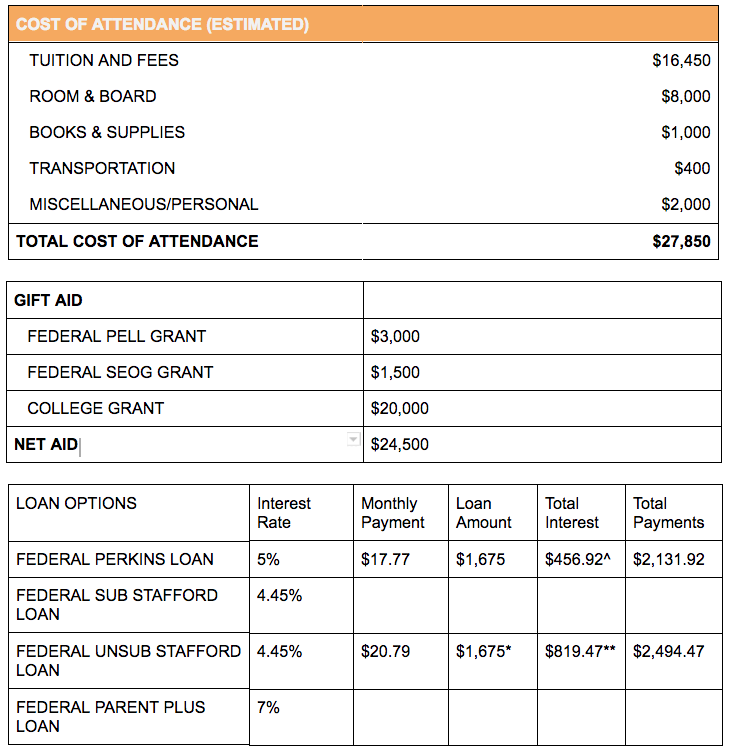 If you know what you’re looking for, you’ve likely already figured out that I’ve totally set this up to be a pretty sweet deal. The total estimated cost of attendance is $27,850. The Gift Aid offered is $24,500, which only leaves a difference of $3,350.

Keep in mind that this is yearly. Financial aid award letters only include the following academic year, remember that. So, $3,350 needs to be multiplied by four times to get the amount needed to bridge the gap between gift aid and financial aid. This is under the assumption that you’ll graduate with your degree in four years, with a largely unchanged financial aid package.

If that was the final number, it wouldn’t be so hard to swallow, but then you have to take into account the interest that will accrue, or add up, from those loans.

The Devil That Is Interest

As a simple standard rule, the Federal loan options given are (more likely than not) going to have a lower interest rate than private loans. Basically, if you’re going to take out loans, taking what the government offers first is usually a better deal in the long run. There are certainly exceptions to this rule, and you can definitely check out private student loan options, but you’ll more often than not want to accept aid from the government before dipping into that well.

Based on this financial aid award letter, if you accept both of these government-offered loans, your entire tuition will be taken care of, but it still leaves you with debt. In this instance, we’re assuming that you went to school for four years and used the six following months of deferment. It also assumes a 10-year repayment plan, the standard length for paying undergraduate loans.

You’ll leave school with a total loan repayment debt of $17,950.

While that number is nowhere near what’s considered high these days, it sure as heck added up pretty quickly despite all of that aid, right? And that interest accounts for a few thousand of what you owe. If you had the ability to pay it off immediately after school, it would total out at $14,294, but that’s not super realistic for most newly graduated individuals.

This is the part that’s usually hard to grasp at 18. It’s hard to grasp at any age, but it’s really important that you understand the cost of education, what it will add to your career, and if the pros outweigh the cons to taking on debt.

Does Interest Accrue While I’m in School and During Deferment?

Simply put, most of the time, yes. Interest accrues, or adds up, from the second you take out the loan until you begin paying it back. One exception are Federal Perkins Loans, though, which won't require interest payments until after the 6-month deferment. Other than that, the only thing deferment really means is that you aren’t required to make a monthly payment.

While many graduates need to take that time to get settled into their careers, which is why the deferment exists, it does add to the total cost of your loans. This leads to the next aspect of understanding your financial aid, the capitalization.

One of the most under-accounted for aspects of the total cost of education is called capitalization. Basically, after four and a half years, all of the unpaid interest on your loans essentially rolls into your principal, and you’re then charged the corresponding interest on that total.

Here’s a breakdown of the math:

We’ll look at the Federal Unsubsidized Stafford loan for freshman year as our example. The loan accepted would be the $1,650 dollars at the standard interest rate of 4.45%. If you do not pay that interest off while you’re enrolled at college or during the 6 month deferment period, you’ll end up adding on $335.42 at the end of that period.

With me so far?

Now, from this point on, your interest is charged based on that new total. This results in the total loan amount of $2,494.47.

This is, however, the most you’ll pay on that loan type and amount. When you accept it again your sophomore, junior, and senior years, you’ll have more time post-graduation to pay off the interest before it capitalizes, and you’ll also have accrued less interest. Silver lining!

How do you fight capitalization? It’s deceptively simple but can be difficult: pay off the interest before that deadline passes. You can do that by making interest payments while you’re still in school or you can pay that portion off in a lump sum after you graduate before the deferment period ends.

This is likely more a note for later, but be sure that you declare the payments are to pay off the interest to avoid capitalization, if that’s the route you take. It’s always good to be clear.

If you’ve received a few acceptance letters, you have different financial aid packages to go through. The math of it all can be frustrating, but never hesitate to speak with the Financial Aid office at your prospective school. Education is clearly an important step in your life, and really comprehending the financial aspect of it will only benefit you in the long run.

There’s a lot more that goes into this, obviously, including the prestigiousness of the program you’re entering, the major you’re pursuing, plus what your heart is telling you to do, but don’t totally neglect the cost. Understand your financial aid award letter and what it means times four, not just for 1/4th of the bill.  While 18-year-old you doesn’t have to deal with it, 23-year-old you will. Thank yourself later.

*If student loans are not repaid while in school, the interest accrued during this time capitalizes, becoming part of the principal loan amount. Interest is then charged based on that capitalized amount.

^Federal Perkins Loans are an exception to the rule. The interest does not begin accruing until the terms in school, plus deferment period, have passed.

These numbers are calculated based on 4 years in college plus the 6-month deferment period before beginning payments.