Previously, graduation rate statistics were limited to just first-time, full-time students, omitting information about part-time and transfer students. After many years of criticism from pundits in the higher education world about how graduation rates are calculated, the federal government took a major step to make the statistics more relevant by including transfer and part-time students.

For decades, the federal government has required institutions to provide statistics on the graduation success of students who start as full-time freshmen. These students, who typically begin undergraduate studies right after graduating from high school, represent 47% of undergraduate students.

Graduation statistics for students who began school part-time or who transferred have never been collected. In other words, the data collection system ignored the completion rates of nontraditional students who actually represent the majority of the nation’s students.

Colleges and universities must report how many of their full-time students, who start as freshmen, end up earning a bachelor’s degree in four years. Students, however, who transfer, are counted as never having graduated from their original school.

At Chicago State University, a public university, only 52% of full-time students stick around for their sophomore year, which is a stunningly low figure. 48% of freshmen won’t graduate from Chicago State because they left during or after their freshman year.

Chicago State’s four-year grad rate is shocking at just 2.5%. But a much greater percentage of the incoming freshmen will graduate, albeit from another college or university. Moreover, full-time students who transfer to Chicago State also are much more likely to graduate.

The federal government is publishing statistics for two-year and four-year colleges and universities that show for the first time how many previously ignored transfer and part-time students are progressing towards graduation for a certificate or degree.

Colleges and universities now report the six and eight-year graduation rates of students who were part-time or who transferred in. You also can see how many students still are enrolled at the institution or have enrolled elsewhere. You can find these figures by pulling up a profile on College Navigator.

Here is an example from California State University–Los Angeles of what you will find: 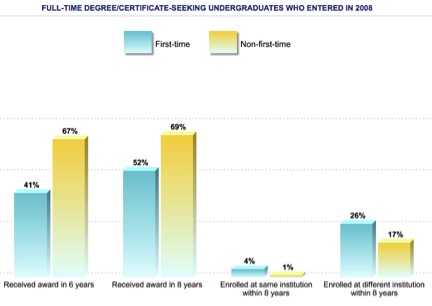 Looking at national figures, you can see six-year graduation rates:

The additional data can make a difference in evaluating schools. Michael Itzkowitz, a former director of the federal College Scorecard and current director at Third Way, used the University of Maryland as an example.

The urban university has a graduation rate of just 10% for its full-time, first-time students. That looks terrible, but it also is misleading since 3% of its students match that description. When part-time and transfer students are included, 43% of students receive a degree within six years.

College Navigator: You can find both the retention rates and graduation rates. You will also see six-year grad rates broken down by race and ethnicity, as well as gender. It’s unfortunate that the government doesn’t provide four-year statistics for these categories.

College Results Online: This contains graduation rates and retention rates for public and private colleges and universities. After finding a school's profile, you can click the Similar Colleges button and generate a list of peer institutions that are ranked by graduation rates and many other measures.

Lynn O’Shaughnessy is a best-selling author, speaker and journalist. Her book, The College Solution: A Guide for Everyone Looking for the Right School at the Right Price, is available on Amazon.com.