How to Shelter Assets on the FAFSA

Student and parent assets can affect the student’s chances of getting grants and other need-based financial aid. There are, however, several steps you can take to reduce the impact of assets on eligibility for need-based aid.

Check Out Our Extensive Scholarship Database!

Sometimes families want to shelter assets on the Free Application for Federal Student Aid (FAFSA) to increase eligibility for need-based financial aid. Sometimes they want to preserve assets for future use for something other than higher education, such as down payment on a house or starting a business.

There are four main methods of sheltering assets on the FAFSA:

Assets must be reported on the FAFSA as of the date the FAFSA is filed. In practical terms, this usually requires reporting the net worth of the asset as of the most recent bank and brokerage account statements. However, you can make last-minute changes in your assets before filing the FAFSA, so long as you keep a dated printout from each account’s website showing the account balance after the change in assets.

Reportable and non-reportable assets are illustrated in this table. 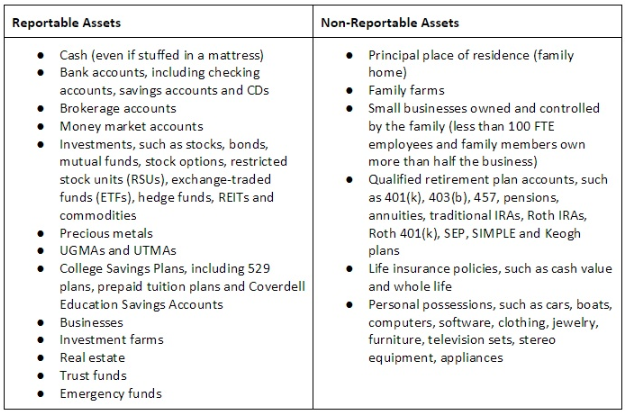 One of the most common mistakes on the FAFSA is to report retirement plans and net home equity as investments. These are non-reportable assets.

It is also important to distinguish assets from income. Money in a qualified retirement plan is ignored as an asset, but contributions to and distributions from a qualified retirement plan during the base year count as income on the FAFSA. Some of the income may be taxable and some may be untaxed income, but both have the same impact on eligibility for need-based aid. Even a tax-free return of contributions from a Roth IRA counts as income on the FAFSA.

Shifting an asset from a reportable to a non-reportable status may sometimes lead to income, such as realizing capital gains when an investment is sold. Generally, it is best for this to occur prior to the base year, so that it doesn’t artificially inflate income.

There may also be limits on the ability to use a non-reportable asset to shelter money on the FAFSA. For example, qualified retirement plans are usually subject to annual contribution limits, so it may take several years to shelter a lot of money. On the other hand, contributions to an annuity may allow the family to shelter more money more quickly.

Insurance salespeople often encourage families to use a cash value or whole life insurance policy to shelter money from financial aid formulas because they get paid high commissions. But, using a life insurance policy to shelter money is not recommended by independent financial advisers because such policies have high premiums, a low return on investment, and high surrender charges. The premiums are also not deductible and the family will have limited access to the money.

Trust funds often backfire. Trust funds are reportable as an asset, even if access to the principal is restricted. The main exception is when a court placed involuntary restrictions on access to principal, such as to pay for future medical expenses of an accident victim. If the restrictions came from the grantor who established the trust, the restrictions are considered voluntary. Another exception is when ownership of a trust is being contested, such as a testamentary trust where the estate has not yet been settled. As soon as the dispute is resolved, however, the trust is a reportable asset.

A good strategy for sheltering assets is to use them to pay down debt. Using assets to pay off credit card balances, auto loans and mortgages can not only make the money disappear, but it also represents good financial planning sense. If you’re paying a much higher interest rate on your credit cards than you’re earning on your bank account, you will save money by paying off the high-rate debt since you will be paying less interest.

The parents should also consider accelerating necessary expenses. For example, it is better to replace the roof on the family home before filing the FAFSA than soon afterward. Necessary expenses may include maintenance items as well as replacing a car or other equipment that is near the end of its normal life.

Although businesses are treated more favorably than investments on the FAFSA, rental properties are normally considered investments, not businesses, unless they are part of a formally recognized business that provides additional services (e.g., maid service at a hotel). A vacation home is considered an investment, even if you rent it out for part of the year.

Intentions for the use of money don’t matter. For example, if you sell your home and intend to use the proceeds to buy a new home, you must still report the proceeds as an asset until you are legally committed to buying the new home. Similarly, intending to use the money to pay for retirement does not matter, not even if you are already over retirement age.

Assets owned by a younger sibling are not reported on your FAFSA, but may be reported on the CSS/Financial Aid PROFILE form. However, money in a 529 college savings plan, prepaid tuition plan or Coverdell education savings account is reported as a parent asset if the parent or the child is the account owner. Shifting assets to a sibling may have limited utility in sheltering it from need analysis unless the sibling will not be going to college (e.g., a special needs trust).

529 college savings plans, prepaid tuition plans and Coverdell education savings accounts are not reported as an asset on the FAFSA if they are owned by someone other than the student or the custodial parent, such as a grandparent, aunt, uncle, cousin, older sibling or non-custodial parent. However, any distributions from such a plan must be reported as untaxed income to the beneficiary on the subsequent year’s FAFSA.

Can I Use A 529 College Savings Plan?

It is usually better for relatives to wait until after the student graduates to give the student a graduation present to pay down his or her student loans. That prevents the money from hurting the student’s eligibility for need-based financial aid.

There are a few workarounds when a college savings plan is not reported as an asset on the FAFSA. One is to change the account owner to the parent or student. Another is waiting until after the FAFSA is filed for the junior year in college, when there is no subsequent year’s FAFSA to be affected by the income, assuming that the student will not be immediately going on to graduate or professional school within two years of graduating from undergraduate school. Another solution is to rollover one year’s funds at a time to a parent-owned college savings plan after the FAFSA is filed but before taking a distribution to pay for college costs. It may be necessary to have the parent-owned 529 plan be in the same state as the grandparent-owned 529 plan to avoid recapture rules. Finally, one can take a non-qualified distribution after graduation to pay down debt. A non-qualified distribution will be subject to ordinary income tax at the beneficiary’s rate plus a 10 percent tax penalty, but only on the earnings portion of the distribution.

Strategic Positioning of Assets
Student assets are assessed more heavily than parent assets on the FAFSA. A portion of parent assets are sheltered by an asset protection allowance that is based on the age of the older parent. Any remaining assets are assessed on a bracketed scale from 2.64 percent to 5.64 percent. Student assets, such as custodial (UGMA or UTMA) bank and brokerage accounts, are assessed at a flat rate of 20 percent, with no asset protection allowance. In a worst case scenario, each $10,000 in the student’s name will reduce eligibility for need-based aid by $2,000, compared with $564 for each $10,000 in the parent’s name.

Note that the asset protection allowance has been decreasing rapidly since 2009-2010 and may disappear entirely in just a few more years if Congress does not act to fix the problem. Nevertheless, parent assets will still have less of an impact on aid eligibility than student assets.

Clearly, it is better for parents to save for college in their name than in the student’s name.

So, one strategy for improving aid eligibility is to shift assets from the student’s name to the parent’s name. The best approach is to move the money into the custodial version of a 529 college savings plan. This 529 plan is titled the same as the original UGMA or UTMA account, with the student as both account owner and beneficiary. Unlike a regular 529 plan, the beneficiary cannot be changed. But, since July 1, 2009, custodial 529 college savings plans have been reported as a parent asset on the FAFSA is the student is a dependent student. This yields a more favorable financial aid treatment.

Note that contributions to 529 plans must be made in cash, so the UGMA or UTMA account will need to be liquidated first. If this will yield capital gains, it is important to either offset them with capital losses or have them occur before the base year, so that they do not artificially increase income.

One cannot simply move the money into the parent’s name, as legally the money is the property of the child. However, one can spend the child’s money for the benefit of the child and set aside a similar amount of parent money at the same time. For example, one could spend the money on necessary expenses for the child that are not parental obligations, such as test prep classes, a car to commute to college, a laptop or tablet computer, computer software, a dorm refrigerator and a dorm microwave oven.

Simplified Needs Test
The simplified needs test will disregard all assets on the FAFSA if parent adjusted gross income is less than $50,000 and the family satisfies one of three additional criteria: